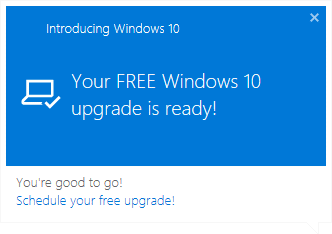 Microsoft has stepped up its game trying to encourage users, at times to their detriment, to upgrade to Windows 10. As an IT Consultancy, questions about upgrading to Windows 10 dominated the landscape from about June to September of 2015. Then seemingly died down. Not to be undone, Microsoft has added the new taskbar popup to its arsenal, reinvigorating end-user concerns and an onslaught of tickets titled “* Windows 10 *”.

Don’t get me wrong; I think Windows 10 is a reliable operating system, and I think Microsoft showed it too can be altruist by conforming to a well-established industry norm—at least until the summer of 2016. The problem is compatibility. Unfortunately, many software developers are as quick to adapt—think “compatibility mode” in IE.

ON PRO, ENTERPRISE AND ULTIMATE EDITIONS

A word to the wise, RegEdit is no place for the meek. Exercise caution when working with the registry.